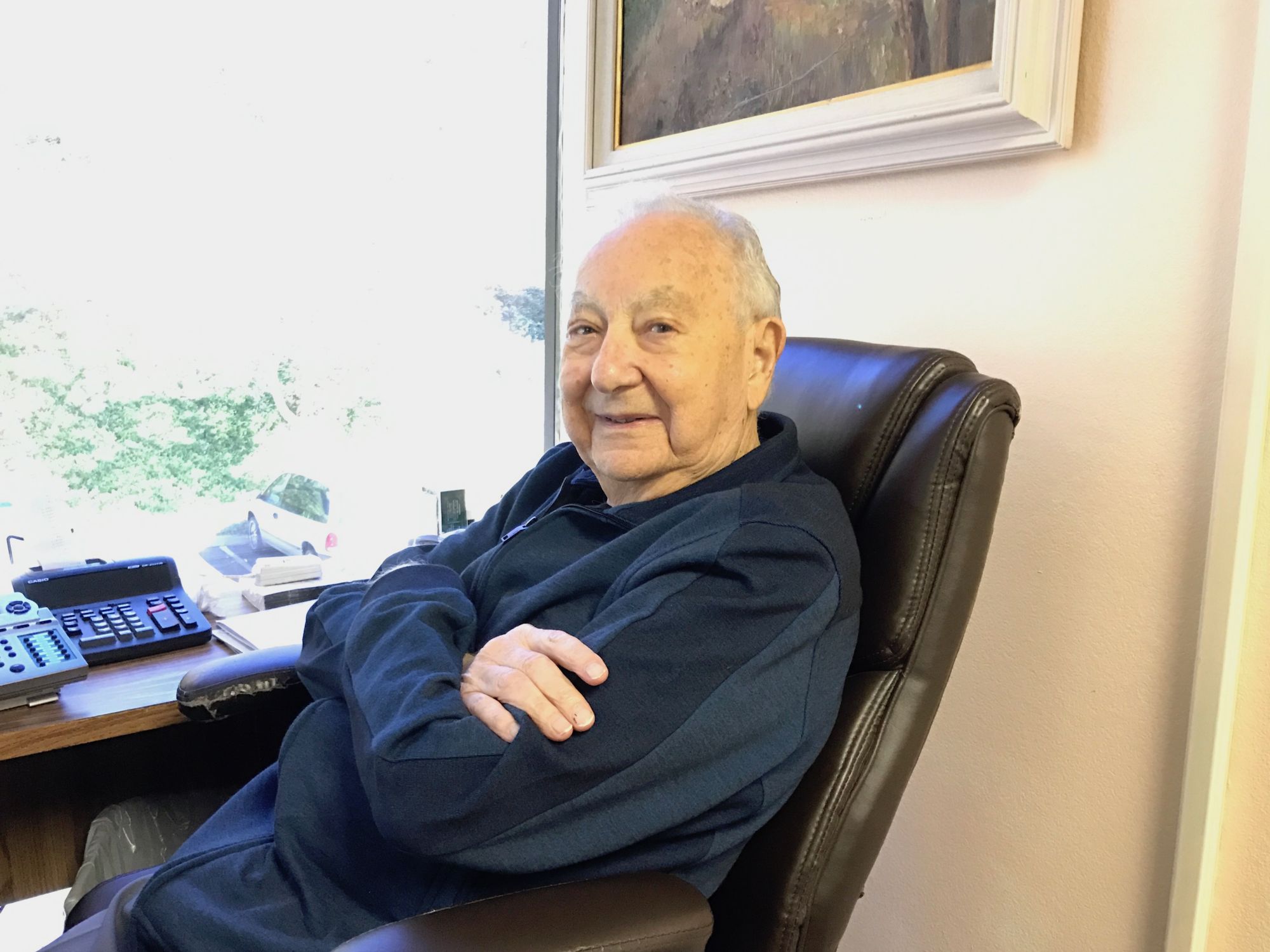 Friday, June 30, Leon Frank rode out to what would be his last roundup.  Leon enjoyed every minute of his 94 exhilarating years he shared with us on earth.  Leon was my father, my partner (for the past 24 years) in Evolution Audio & Video as well as my best friend and confidant.

At the age of 70; when most “sane” people would dust off their work clothes, grab a pair of slippers and start looking for a retirement hammock to swing between two trees Leon was just getting started – again.

He loved to be in the middle of things, “schmoozing” with people, talking about business, life and his many adventures.  So, back in the early ‘90’s, when I had just closed down my first A/V business and never (ever) wanted to deal with another crappy business “partner”, Leon offered up his services to get Evolution rolling.  I remember him telling me, “I’ll give you 2 years of my life to help get the business on solid ground – 2 years”.  Well, 2 years went by and another amazing 22 years were to follow before he decided to “retire” permanently from Evolution.

After serving as a B-24 radio operator in WWII, being shot down twice and (obviously) surviving both crashes, he married the most beautiful women in the world, my mother, Peggy.  Together they ran an oil distribution company in both Buckeye and Phoenix Arizona.  If that wasn’t enough, he also became a cattle rancher in Nevada.  Not one to settle in for too long, he moved to LA and became a famous hairdresser in the 60’s and 70’s while he opened multiple salons throughout the San Fernando Valley.  Later he went into real estate – selling land and eventually received his broker’s license as well.

Not bad for a Jewish kid growing up in New Jersey whose father owned a “Schemata” business.

So, what’s left to do but saddle up and ride off into the sunset?  Not Leon.  He was chomping at the bits to find another adventure.  After our mother passed away 3 years earlier, Leon didn't quit on life.  He found love with another great lady, a true angel - Eileen.

He always enjoyed art…  especially Southwestern art.  Many that have met Leon know of his long time love affair with the Southwest culture - probably dating back to his cattle ranching days.   He went from appreciating fine art to creating it.  He began to paint – and paint – and paint.  Much of his artwork can be found inside our Evolution demo rooms.  Many of our clients are proud owners of an "original Leon” painting…  He inspired his granddaughter to pick up a brush and paint.  Dad, I'm happy to say that your protégé is now amazingly gifted – your inspiration was the spark that ignited that talent.

Here’s a man that did it all, lived it all, enjoyed everything and everyone, everyday of his life – all 94 years of it.

Leon, we miss you and know that you’re on to further adventures.  Happy Trails…

Jay was one of the first proponents of multi-channel surround sound during the early Seventies. After writing numerous articles on quadraphonic sound, he boldly predicted that multi-channel audio would someday be used with video for in-home use. Evolution was first conceived during these early years and garnered many members from around the globe. He pioneered the first laserdisc video store that specialized in high-end sound and front screen projection systems.

When he's not at work (and sometimes when he is), Jay enjoys running. He has participated in numerous events from 5k's to full Marathons and Ultra-Marathons.  Amazingly he's still alive. Mike is the youngest of our Evolution Team. He has extensive knowledge in Computer Programming and Networking. Previously Mike worked with a major cable TV company in Southern California. He honed his current skills from initially installing cable TV and building exotic computer systems. Mike has assisted in the development of the first high-end DVD server, Theatris. Currently Mike facilitates in the planning and installing of complicated Home Theater and Home Automation systems. He has a passion for anything electronic. Brian has been serving the high-end electronics community for many years.  His passion for custom integration eventally led him into the world of professional installation.  He has completed multiple manufacturer courses and is versed in everything high-end audio & video.

Jesse has been involved in the installation portion of our business for well over 30 years - and it's amazing that he's only in his twenty's...  His work is only exceeded by his youthful appearance and dedication to our clients.